Lawyer Andy Carpenter and his golden retriever, Tara, work to free a man who risked it all to help a dog in need

Lawyer Andy Carpenter and his wife, Laurie, enjoy walking their dogs, Tara and Sebastian. By this point in their marriage, it’s routine. When out for one of their strolls, their simple ritual isn’t so simple anymore. Across the street, a man is mistreating his dog. Three things happen at once: Andy yells, Laurie runs to stop the abuse, and so does a closer passerby, who so thoroughly beats the owner that both are arrested when the cops arrive.

Andy scoops up the dog and takes him to the Tara Foundation, the dog rescue organization that’s always been his true passion. Meanwhile, at the police station, the passerby is identified as Matthew Jantzen, and he’s wanted for murder. Andy and Laurie are struck by the fact that Jantzen, a man on the run, would nevertheless intervene to help a dog, and decide to find out more.

Dog Eat Dog, the twenty-second installment in the Andy Carpenter series, features the charming cast of characters – old and new – that David Rosenfelt is known for and the dogs that accompany them. 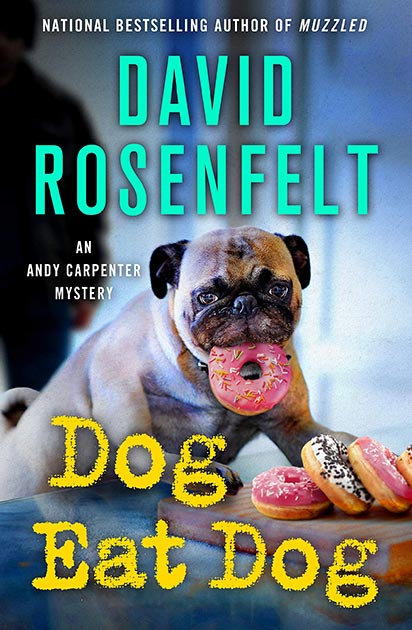